Describe a person who you follow on social media

l’d like to talk about my favorite singer whose name is Jane. She is an English singer. She is 24 years old. I am interested in singing and I like Jane’s songs very much. I usually search online for some information about her.

I still remember it was probably two months ago. My best friend told me that Jane posted her new song on her social media called Tiktok, so I installed Tiktok on my mobile phone. I opened Jane’s account and found that she had a lot of followers. I immediately followed her, too.

Jane posts many beautiful songs. In addition, she shares some videos to teach singing skills. I like singing very much. That is why I want to follow her on social media. Every time she posts a new video, I can watch it at once. I watch her videos and practice singing every day. I find that I have improved my singing skills. I can sing better than before. I feel very excited.

Jane has a pleasant personality. She is patient to answer all kinds of questions from her fans. Sometimes she offers live stream classes and teaches people how to sing her songs. No wonder so
many people like her. I will recommend Jane to my friends. I am sure they will follow her, too.

1. What can people do on social media?

There are a lot of resources on social media. Some people will search for useful information. It is very convenient for them to get what they want. Working adults or students often watch movies or listen to music on social media after they finish their work or tasks, which can reduce their stress. Also, many people like posting pictures of their daily life and sharing them with their friends. What’s more, social media offer platforms for companies to promote their products. So different people do different things.

2. Do you think older people and younger people will use the same kind of social media software?

I suppose not all the software that they use is the same. Compared with older people, younger people use more different kinds of social media software. They want to follow fashion, so most of them will use the latest software to catch up with the trend. While older people tend to read the news or some useful information on social media. They often use official software with simple functions. It is easy for them to get what they want.

3. Do older people spend much time on social media?

4. Are non-social media like television and newspapers still useful?

It seems to me that these kinds of media are still useful. In some poor places where the Internet is not commonly used, people still need to watch TV or read newspapers to know what is going on in the world. Also, many old people prefer to watch the news on television or read newspapers. This is the main source to get information.

Image : Photo by Merakist on Unsplash 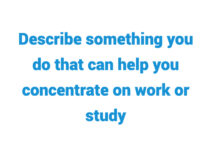