Describe a Person Who Likes to Dress Fashionably/Well

You should say:
– Who he/she is
– What job he/she does
– What kind of clothes he/she wears
– And explain why he/she likes fashion

Well, the person who pops into my mind is Lady Gaga. I guess everybody knows her. She is a very famous singer, songwriter, and actress in the US. Actually, she is not only well known for her pop music, but also for her unique fashion taste..

She expresses fashion in a very bold way. For example, in a concert, she wore a silver shiny sea urchin inflatable frock, then she wore shell bras and 8-inch heels, and finally she became a giant octopus. It seems like the concert was themed with sea life. If you think her crazy looks are just restricted to concerts or performances, you are totally wrong. You can always read news about Gaga’s walking on the street in an experimenting outfit. She would wear raw meat, a see-through body stocking with some strategically placed roses. She even once painted Picasso in her face and dress, and looked like an oil painting. She might wear wedding dresses as a daywear.

Speaking of the reason why she is so avant-garde, in the Netflix documentary Gaga gave the answer. She reveals that her wacky fashion choices come out of a desire for control in an industry that loves to take control away from its artists. When they wanted her to be sexy or they wanted her to be pop, she always put some absurd spin on it that made her feel like she’s still in control.

I love her, and to be honest I really adore some of her looks. She is more than a singer, but also an artist who is expressing herself and voicing for some vulnerable groups.

Q1: Who she is: The first person that pops up in my mind is Kate Moss.

She is one of the most sought-after and highest-paid models in the 90s and early 21st century. In 1990, she caught the attention of the fashion industry when a series of nude photographs of her were published in the magazine The Face. At the time, the industry was populated by supermodels known for their statuesque and curvaceous frames. Moss stood out for her natural look, street style and slight build. Apart from walking the runways, she appeared in ad campaigns for many prestigious luxury brands, including Dior, Burberry, Chanel and the like and she also became a muse to several legendary designers.

Q3: What kind of dresses she wears

She is known for her iconic style, which has attracted a more passionate following than any other model and fashion icon before her. Her dressing style can be summarized as the perfect balance between nonchalance and a touch of innocence. Among the street photos taken of her, skinny jeans, thigh boots, jackets, saddlebag are a few key elements. If you sec photos of her on the red carpet, you’ll find most of the time she’s going for simple elegance, wearing loose-fitting dress and red lipstick. She’s like a fashion chameleon who could carry off looks of different styles.

Q4: How do you feel about this person

I really admire her for her bold experiments in style and long career span as a model. A lot of models retire by their mid-20s, while she remained busy and have appeared on more than 400 magazine covers. Apart from working in front of the camera, she’s also involved in several design-related ventures, rolling out her own collection of clothes, handbags, perfume, cosmetics and jewelry in collaboration with other brands.

1. Do you think online shopping will replace in-store shopping in the future? Why?

2. Why is fashion very important to some people?

3. Are older people as fashionable as young people? Why?

4. Are women more fashionable than men? Why? 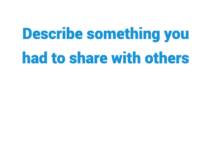 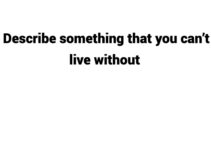